Dance
September 11, 2018
Chris Roberts, Arts Integration Coach for the Provo City School District, is teaching other teachers how to integrate the arts into their teaching to bring the excitement back into learning. He is doing this through the art of dance. Roberts has worked in the classroom of every teacher in the Provo City School District who has participated in the Arts Leadership Academy or earned the Arts Integration Endorsement.
Roberts has taught in elementary schools since 1978, beginning in the Nebo School District. He now works side-by-side with teachers in all elementary school grades to provide dance integration instruction, giving teachers the courage to continue using dance with their teaching long after he has moved on to another class. The children love his energy and enthusiasm, and they learn to love dance while grasping concepts more strongly in all curricular areas because of the arts integration.
Although his dance influence is strong, dance was not always such an important part of his teaching. Roberts’s youngest daughter was involved with Brigham Young University’s Creative Dance for Children program from the ages of 4 to 17. This is when a spark was ignited in Roberts. He was the designated carpool driver for her and two friends.
“Instead of sitting in the car waiting, I would go in and watch the class,” he said. “As the years progressed, I saw the creativity, problem-solving skills, cooperation skills, and self-confidence grow in my daughter.”
In 1991, Roberts and a fellow teacher wrote a grant to the Utah Arts Council (now the Utah Division of Arts and Museums) and were able to bring an artist-in-residence to their school. It was Doris Trujillo. She spent ten days at the school teaching dance to their students, and at the end of her residency she left them the book First Steps in Teaching Creative Dance to Children, by Mary Joyce. 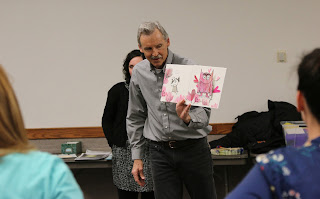 “The next week, I took my students into the gym and did lesson one with them,” Roberts remembers. “I literally held the book in my hand and read what it said to say to students.” After that, he began to take workshops on how to teach dance to children and, eventually, he began teaching the workshops himself.
“Marilyn Berrett heard about me and observed me while I was teaching dance to my students. She began bringing BYU students to observe me,” Roberts said. Berrett, a professor of dance at BYU, got Roberts involved in UDEO (Utah Dance Education Organization) where he was elected as elementary representative and served for six years. She also got him involved in daCi (dance and the Child international,) where he was elected as member-at-large for three years, became chair-elect for three years, national chair for five years, and is now serving as national representative.
Roberts and Berrett presented in Brazil at a daCi international gathering and in Albuquerque and Long Beach at NDEO (National Dance Education Organization) conferences. “Because of many great mentors and strong women pushing me, I got more and more involved and was awarded the Governor’s Leadership in the Arts Award in 2012,” Roberts said.
One way that Roberts loves to teach through dance is by integrating the art with children’s books. “Teachers will take a book and look at the illustrations and text for inspiration for dance. It makes the book come alive for students,” he said.
He also said that science has many ways to naturally add dance to help students learn concepts. For example, fourth-grade teachers love to teach weathering and erosion through dance. 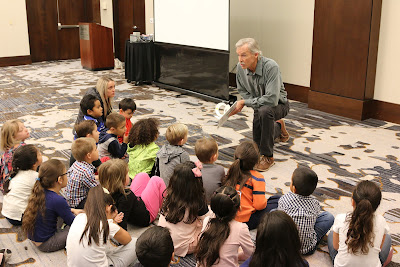 Deborah Raymond teaches a sixth grade gifted/accelerated class at Sunset View Elementary in Provo. Her students from last year actually started dancing with Roberts the year before, when they were fifth graders. According to their fifth-grade teacher, they were very awkward and self-conscious when they first started.
“When school began last year, we’d only been in session for a few days when the students started asking me if they were going to be able to continue dance class with Mr. Roberts. I didn’t know what they were talking about, so I asked, and they couldn’t say enough about how much they loved learning to move in such creative ways and began begging me to make sure they would be able to keep dance in the schedule,” Raymond said.
“He very generously made room for us. Chris has so much respect and kindness in his teaching style. I’m sure that is the biggest reason the students continued dancing,” she said. “At a time when students are becoming more aware and catapulting into a hyper-awareness of their bodies, Chris taught them to be comfortable and gave them tools for expression with the very part of themselves that they were most awkward with.”
Raymond said that her students looked forward to dance every week and were disappointed if it ever had to be cancelled. “Some of the students felt the benefits included helping them communicate better with their friends and family because they had learned to handle themselves in a dignified way during dance,” she said.
“Integrating the arts is important because of what it gives to many students that usually don’t shine in typical educational environments,” Roberts said. “It brings joy into learning.”
Laura Giles is a lover of all things art, a first-grade teacher in Alpine School District, a writer for The Daily Herald newspaper, an Arts Leadership Academy graduate, and has earned the Arts Integration Endorsement from Brigham Young University. She can be reached at LauraCGiles@gmail.com.
Comments (1)