The Art of Collaboration 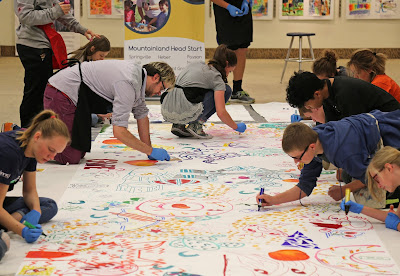 Art students in James Rees’s classes at Provo High School have had the opportunity to work collaboratively with the community during the last couple of years to beautify the schools of young children. Two different murals were created for Mountainland Head Start – one for the school in Orem and one for the school in Lehi.

The first mural was created in collaboration with elementary students from Lakeview Elementary School in Provo. Art teacher Elicia Gray’s students created artworks depicting robots. Then, Rees’s students incorporated the robots into the mural. About 80 students total – elementary and high school – helped to create the piece. Street artist Scott Stanley, from Salt Lake City, helped the students to make the works on the mural cohesive.

The second mural was created in the gallery of the Provo Towne Centre Mall. On a Saturday morning, doughnuts were served and the public was invited to work collaboratively on the artwork. About 55 community members and 45 of Rees’s students helped to create the piece. Again, Scott Stanley pulled it all together with color, line and texture.

Rees said that he is a strong advocate for a connection between his students and their community. “The arts pull the community together,” he said. 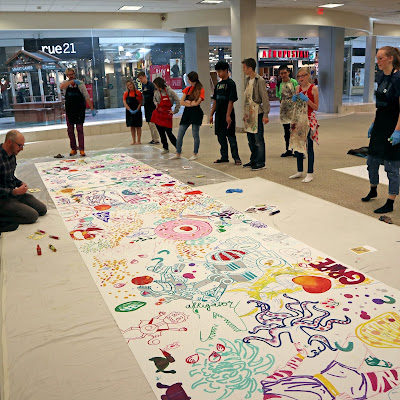 In the cases of the two murals, the younger preschool children who attend Mountainland Head Start will benefit for years to come from being exposed to the large, colorful artworks. The older students – both the elementary and the high school artists, benefit because they worked together to create something that they were able to share with others.

These two projects are not the only ones that Rees’s students create to benefit the community. For nine years, his students have created pottery to donate to “Bowls For Humanity,” an annual fundraiser sponsored by Provo’s Food and Care Coalition to help the homeless.

Rees, who is involved with and a supporter of BYU ARTS Partnership, believes strongly in the benefits of the arts in the schools.  In addition to the arts being a vehicle for community connection, they are also a means of integrating multiple curricular areas. Participation in the arts helps to build empathy and connections outside of school, according to Rees. “Arts are directly applicable outside the classroom,” he said.

Laura Giles is a lover of all things art, a first-grade teacher in Alpine School District, a writer for The Daily Herald newspaper, an Arts Leadership Academy graduate, and has earned the Arts Integration Endorsement from Brigham Young University. She can be reached at LauraCGiles@gmail.com.